All For Nothing, From the Heart & Get Some!

ALL FOR NOTHING
All for nothing is a hardcore band from Rotterdam, the Netherlands. They play high energetic hardcore songs with sing-a-long choruses, punishing beat-down passages and melodic riffs all based on various influences.

From the Heart
From the Heart is a Rotterdam based hardcore band, formed in early 2012. While they have been significantly influenced by Eurocore and New York hardcore,
their style can be best described as fast metallic hardcore.

Get Some !
In 2012 Jos, Sander, Robin, Sven and Bart turned the amps back on. They realised the itch needed to be scratched. Years of strumming in former hardcore punk bands like I-Reject, Brothers in Blood and Black Cloud Halo, the boys got together for a new project. Fusing the frustrated, the freaky and the filthy, you can come and GET SOME! 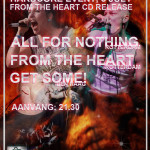