“We are The Fucking Frontiers, so the limits will be reached!”

This fragment from their song ‘Barrier Breached’ is something that The Frontiers certainly live up to. To these young adults from Spijkenisse there is nothing better than playing their heavy music. The power trio has just finished recording their self-produced debut album Barrier Breached. The album was released on the 25th of April 2018 and features loud singer and bassist Tim van den Bogaerdt, fast guitarist Thijs van der Sluijs and smashing drummer Richard Poschmann.

The writing of the band is inspired by bands such as Foo Fighters, Metallica, AC/DC, Airbourne, Motörhead, Iron Maiden and Volbeat. The album is therefor a mixture of Hard Rock, Heavy Metal, Thrashmetal and Punk. The Frontiers have made their own sound which makes it impossible to classify them as a certain genre. Not caring about musical rules, they play whatever they like.

The three-piece act has played together for just over five years and has played festivals such as ‘t Blok, De Hut, Bernisse On Stage, Spijkenisse Festival and Metropolis Festival. Live performances consist of a non-stop energetic set of songs from the album and rock/metal covers. With the album out they are hungry to play live. Ever ready to play, they are guaranteed to kick some ass. Earplugs are advised, because the volume will be cranked up to eleven and the ceiling will come off!

We are Fosvor Vanish. A melodic sludge metal band rocking out to the power of the riff. With a mish mash of doom, punk and progressive metal we bring you the music that makes you bang your head and go wild.
Fosvor Vanish consists of:
Merijn Akkerman – Lead vocals and bass guitar
Tim Romeijn: Lead guitar and backing vocals
Noah van den Hondel: Rhythm guitar and backing vocals
Kjell Boele: Drums

We are fucking vermin. Nasty, brutal and heavy is our preffered sound, although catchy might also be appropriate. Starting of as doom/stoner metal it quickly evolved into the realm of progressive metal with hints of death and doom.
Vermin exist of vocalist and guitarist Matthijs, drummer and total beast Richard, guitarist and effect wizard Merijn and bassist Lenny (not to be confused with Lemmy). 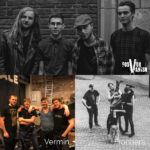