Live Hard Bookings proudly presents! Hardcore AND Hiphop, since both genres have the same influences why not bring them together on one show?! Support yo shit!

Djamhellvice FR hiphop (ex Providence)
DjamHellVice is a rapper from Paris (France) who began in 2011. After a MCD and a mixtape he decided to make his first album « Controverse » (2016) and toured around the France then Switzerland, Belgium, Finland ans Spain. Djamhellvice shared the stage with artists like GZA (Wu Tang Clan), Jedi Mind Tricks, Dilated Peoples, La Coka Nostra, Heavy Metal Kings and Outerspace….
His style differs from contemporary french rap. He spit an aggressive flow on dark and hard boom bap beats.
DjamHellVice describes through its lyrics a society regulated by profit and social inequalities. He also denounces the animal exploitation.

Get Some-Hardcore The Hague hardcore
Fast hardcore punk from the Hague!

Defilement German Beatdown/Hardcore
Defilement hailing from Trier, Germany bringin’ you Beatdown Hardcore straight in your face. Be sure to bring your dancing shoes!

Kinda Broke Hellevoetsluis HEUJ HEUJ HEUJ punk rock!
Quick guitar riffs, strong bass and a female vocalist with rock music deep within her veins, guided by clean drums; those searching for a punk rock party should search no more! With a great mix of well-known covers and brand new original material Kinda Broke conquers stages all around the Netherlands. With 4 members having different musical influences, they create a sound of their own. Bjorn actually loves Queen, while Kim is able to enjoy both rock and metal as pop music. Remco enjoys System of a Down for example and Tristan… well as long as its punk and fast. So, take The Offspring, add a little NOFX and Greenday and mix it up with some hard rock; the key ingredients for a Kinda Broke show! With Tristan on the drums, Bjorn on the bass and Remco on his guitar you are sure to have a great evening. Combined with vocals by Kim your evening will be one to be remembered. Kinda Broke is ready to rock… are you?

Nadeche Pyka Limburg Hiphop upcoming talent!
Nadeche is a hungry young rapper at the age of 17 who has her roots in Limburg. She is signed at Eastgarden Music stationed in Rotterdam. Currently she’s working hard on her first EP and also to put out more vids! Keep your ears and eyes open there is still more to come from this one!

Guido Meindertsma, known by his stage name Apex, was born in Gouda, The Netherlands on June 30th 1997. At the age of 14, he discovered his passion for rap and started learning lyrics from Eminem songs. Quickly, at the age of 15, Guido started writing his own lyrics as well.
In 2013, Guido met a friend with whom he shared his passion for rap. They decided to write lyrics together and call themselves NewRapIndustries. Many performances followed, among which sold out shows at the local theater. Apex kept writing and finally released his first song “Time Is Running Out” on March 29th 2017. After the first, a lot more were to come… 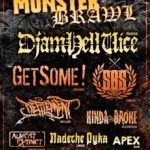