From the Heart, Dawn of Mankind & Faith Ends Here

From the Heart
A Rotterdam-area hardcore band and formed in 2012 with “de Beuk” centered as their home base!
Their playing Fast New York & Oldskool influenced hardcore.
Since these guys played in bands like Fist of Fury & Second Chance NL, their a promise for a party around & on the stage!
With their Madball cover (Hold It Down)  you’ll know a bit what to expect from this band.

“Call it eurocore, call it what you will, these guys play a tight set and get a crowd action in response. (c) Swnk.org”

It all began late 2003, with a four-piece instrumental oldschool hardcore coverband called “Dead End Kids”. Their drummer decided to bring his best friend in to a rehearsal, and suddenly everything clicked into place. Dawn of Mankind was born.
Giving their music a more metallic feel, they got more comfortable in what they where doing. Ever since then, they have been expanding their set, fine-tuning their brutal hardcore blend, and enjoying every second of it!

Dawn Of Mankind is an Eindhoven based, five-piece hardcore band. Ever since they got together, they’ve been ripping your eardrums with their “in your face” music, and pissing people off with their bareknuckle lyrics.

Faith Ends Here was founded in late 2009, existing out of Rob, Jasper, Dylan and Tim. Each member has a different musical background, which is an inspiration to write unique songs, with a homemade sound and a clear message.

When they started, “Faith Ends Here’s” first thing on their schedule was to record a demo CD, which has been released in the last season of 2010. After a successful release of the demo, we are determined to set foot in the hardcore/metal scene. Until Dylan broke his spinal chords so we had to lay back for a while, and tried with several other formations that didn’t work, right now we are ready to blast with a steady formation! Same guitarist different drums which produces:

Hard and slow beat-downs, combined with fast, shredding riffs and beats, deep bass and lyrics straight from the heart are the elements that make F.E.H what it is. Everyone has brought his own style into the band, such as hardcore, metal and punk. 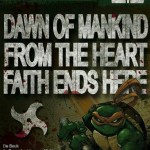