Rott ‘n Damned
https://www.facebook.com/RottNDamned
Rott’nDamned is a Hardcore band from The Netherlands, Rotterdam.
With powerfull lyrics and aggressive riffs they want to tell people all over the world who they are and what they stand for.

Stealers
https://www.facebook.com/stealers010
Stealers…. are a rogue mob existing of 4 city boys gone wild!
They have been spotted since the summer of 2007. Since then, several attacks on law abiding citizens occurred viciously out of the blue.
Their goal: To deafen the land and make people listen to nothing else but Stealers anymore.
Their ways: Operating from the dirtiest city around, Rotterdam, they travel to cities everywhere. There they make alliances at venues that actually pay them to show up and perform their outrageous musical mixture of 77 Punk’n’Soul’n’80’s-Cock’n’Roll!
The audience doesn’t even have a clue what is happening to them!
The Mob steals their money, girlfriends, drinks, hearing and what more
Strangely and alarming enough, this way they manage to create a growing following supporting their evil ways.

Trowing Bricks
https://www.facebook.com/throwingbricksband/
In December 2011, Marius and Niels decided they wanted to do something completely different than the bands they were previously involved in. Named after Ceremony’s most aggressive track, Throwing Bricks was born. While writing music, it became clear the goal with this project was to create a perfect mix of Chaotic Hardcore and 90’s Screamo, with a Sludgy edge.

Throwing Bricks is a collective of 4 friends, who try to put all their (negative) emotion into the music they create. They strive for a intense live show, with presence in the middle of the audience rather than on a big stage. 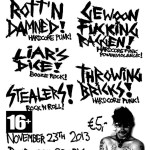